Who Vandalized the Cemetery? Mistake or Deliberate 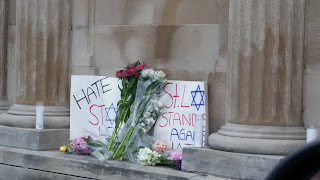 In light of my recent television interview where I speak of the society that we share with people who make poor choices and people who are not rehabilitative, my interview hardly touched on the most recent local crime of the cemetery Chesed Shel Emeth that was vandalized over the weekend and is most deserving of our attention.

As I drove through the narrow road around the cemetery lined by cars of those checking on their loved one's gravestones I noticed that all of the heavy-lifting was mostly completed yesterday followed by a vigil uniting the Jewish Community.  It could have been any cemetery if the vandals were not deliberately targeting the Jewish community and it could have been that the cemetery was at the right place at the right time for the vandals.  Were they drunk and looking for trouble or were they sending a message to the Jewish people?  It has yet to be determined as to whether this was a hate crime of antisemitism or a bunch of low life's who had nothing better to do or both.  Once they are caught, and they will be caught, will they show sincere remorse and have regret?  This will be relevant when we define what kind of people they are.

As I said on my television interview "we live in a society where we expect people to follow the same rules that we do, and that is just not the case.  We live among people who make poor decisions, we live among people with sociopathic behaviors and when people make mistakes whether they go to jail or not, we hope that they can be rehabilitated and that is just not the case all of the time...."    Every person wants to be given a second chance and society always wants to give people the benefit of the doubt. Those that can be rehabilitated are NOT the ones we must defend ourselves against.  Those that made a bad choice and do change for the better are NOT the ones that we must fear.  It is those that make bad choices time and time again and DO NOT change, own their behavior or lack remorse that we must fear and defend ourselves against.   It is unfortunate but we must learn to co-exist because like it or not they live in our neighborhoods shop in our grocery stores, and work in our businesses.  Who vandalized this cemetery?  How would they feel if this were to happen to them and their loved ones?  Some of us believe that one day they will know and experience the sadness they caused others'. This coming from someone who is pissed off and wants to catch the bastards.

The Wake-Up Call is an audience participation presentation that is fun and informative.  I demonstrate how naive we could be and take the audience into the mind of the common menace in society, the sociopath, and potential victim of prevalent scams in various forms including phone, debit card, and online scams. Are you single?  Do you do online dating?  Learn how to safely get a date with a potential mate! Learn the signs of deception and how to tell if someone is lying or telling the truth. Would you know what to do if you became a victim of identity theft? Arm yourself with knowledge and stay one step ahead of the game.  Audiences leave feeling empowered.

A St. Louis-based reality tv show "Welcome To Sweetie Pies" gives ex-felons a second chance by employing them at one of their many Sweetie Pie locations (THE BEST fried chicken) in St. Louis and Los Angeles. Society should be thankful for them because without a sense of belonging or responsibility a person who once darkened the prison doorsteps may not see a light at the end of the tunnel and continue down a dark path.  There are many businesses that employ ex-felons and they should all be awarded.

Posted by The PI Speaker at 5:24 PM No comments: